Here is a YouTube video entitled, In Search of: People of Color, by the Media Research Center.

Constituents come together at a Tea Party event and ask a natural question, “Have you seen any people of color around?”  It makes sense to ask, after all, what do people believe?  And there are all kinds of people … even at Tea Party events.

Tearfully looking away, the girlfriend says to her boyfriend, “You don’t love me anymore!”

Drawing a sky view with his head, the boyfriend ponders a moment.  Then he says, “A man can love only one woman at a time.” Leveling his head to look at her, he says, “Of course, I love you, my darling.”

He hesitates and she looks back; and he says, “But I didn’t say how many women.”

♥ Disclaimer:  The jokes in My Joke Book are not always necessarily the views of the writer.  Occasionally, they can be.

I asked Mr. Netherwood for a response to Curt Clawson’s Republican primary victory. He stated,

Were I a Republican, I would be lamenting the [Republican] Primary.

Yet, having been favored by the outcome, Mr. Netherwood would choose to run against Clawson’s “Economic Plan,” which he believes was “cobbled” together by persons who do Clawson’s thinking for him.  In true form, Clawson tots up the “Penny Plan,” playing the game to get endorsed by Connie Mack.  According to Mr. Netherwood, this economic plan was not even thought out by Curt Clawson per se.

Mr. Netherwood’s style of hands-on leadership is quite different from Clawson’s laisser aller approach to the economy, and leadership, where Clawson would have others do most of his work for him.

Mr. Clawson would simply stand by waiting for someone to toss him the ball.

Mr. Netherwood’s message is to do 95% of his own thinking on all issues, especially on the economy; to lead on the social issues and the U.S. Constitutional issues; and never to allow Speaker John Boehner or Minority Leader Nancy Pelosi to tell him how to vote.

The general special election for Florida’s 19th U.S. Congressional District is on June 24, 2014.

April Freeman will be running for the Democratic Party.

The general special election for Florida’s 19th U.S. Congressional District is on June 24, 2014.

Ray Netherwood will be running for the Libertarian Party.

To read the statement:

The special election for Florida’s 19th U.S. Congressional District in the Republican primary is completed.  The winner is Curt Clawson of Bonita Springs, Florida, as of the evening of April 22, 2014.  Two tables show the voting statistics for Lee and Collier counties that comprise the 19th congressional district of Florida.

In summary, there is quite a wide margin of difference between Clawson’s campaign financing and the other candidates.  Clawson is wealthy buying his campaign to the Republican primary victory.  The U.S. Constitution allows this.  Recently, the U.S. Supreme Court unlimited the amount of contributions one can make to all candidates, keeping a contribution limit to any one candidate.  However, any one candidate can unlimitedly contribute to his own campaign while paying for the monitoring pollsters ensuring that he wins.

“I wish I’d been CEO of a company that didn’t have debt, but the one I took on had a lot of debt, so we had to fight our way through,” Clawson says. “Washington is in a similar position now … I have a little bit of experience in debt I did not create, and I want to bring that turnaround to Washington.”[4]

With respect to Hayes Lemmerz, essentially Clawson transfigured debt to pay off debt and used the debt to pay his hefty selling price.  Additionally, he dumped common stockholders in a lender equity deal via bankruptcy.  However, this is not real experience and continues the same way of handling debt – it still is there.  The majority of the electorate was older in age in this special election and opted not to believe that.

Secondly, the Connie Mack endorsement, although it was not essential, gave Clawson some star power.  Connie Mack has voted many tax hikes and corporate and pension bailouts.  The Penny Plan is foolhardy, means little, not well-thought out, and does not help the budget.

Once again, the Naples Tea Party, Inc., took a hit with Byron Donalds proclaiming Clawson is a conservative.  He decided not to run but instead endorsed Clawson.  What is up?  He just might become the new Chuka Umunna from southwestern France of rhino stylistic.  Additionally, at least, if something goes wrong with Clawson, like committing a foolish crime, Lee County will take the blame, again.

Oh well, madness prevails.  Looking at the next well-financed candidate, Benacquisto, she left some money in her purse, of course.  Everyone knows Benacquisto is smart.  Too many good Republican advisers and Charlie Crist types nearby at ear’s distance are on her side.  Cash on hand is $183,947.  This Florida Republican Party race was not that important.  With a clinging Florida Senate seat and opening multi-verse options now, Benacquisto has nothing to worry about.

Wishing for one of the great madmen, Paige Kreegel, who garnered a healthy second place standing in Collier County, he very nearly cornered a second place finish in Lee County.  The only thing that stopped him was the wealthy Clawson.  If Clawson had not been wealthy and a traveler from the Midwest, he would have won handily with at least 8.24% of Clawson’s campaign receipts.  Voters had paid too much attention to negative ads – the absolute three-point game Clawson plays.

Some caveats at the end of the race are as follows for Southwest Florida:

The Florida House legislative aide of Rep. Dane Eagle’s (R-FL77) wrote the following statement in behalf of him on his driving under the influence of alcohol (DUI) arrest.[1]

“I was arrested in Tallahassee and accused of driving under the influence of alcohol,” Eagle wrote. “While there are some decisions that I would have made differently, I do not believe there is a complete and accurate picture of the events. Under advice of my legal counsel, I cannot discuss all the details right now, but I look forward to publically (sic) sharing the entire story at an appropriate time. Until then, I humbly ask for everyone’s patience. I know that I am accountable for my actions, and I look forward to communicating with my constituents in the near future on this matter.”

… While he is in jail, presumably, over having had a few too many alcoholic drinks, the Florida House continues with the help of his good legislative aide.

Times tables, like second grade math, come handily during troubled times where representatives fail to perceive.  “Remember the ALAMO!” The Texas battle cry had greater effect in time, in Texas’ sovereignty, and in United States’ annexation.

Perhaps, Mr. Eagle should fire the legislative aide, not without cause.  Admitting accusing and arresting a man is serious.  That the public takes readily well.  Nevertheless, to say that making better decisions is bloody better – already – has waived the U.S. Constitution Fifth Amendment in the highest degree of self-incrimination.

Backtracking down the linear path to the beginning of Mr. Eagle’s lustrous career, the constituent goes shortly to the turn in his obscured drinking habits.

For example, taking the Alamo, what did the conscripts do?  Hardly, they bloody well fought to the last man.  So shall the constituent hopes the Rep. Eagle.  Rewriting the legislative aide’s disclaimer, timing tables work better.

“I was arrested in Tallahassee [yes, the capital of Florida] and accused of driving under the influence of alcohol,” Representative Eagle wrote [yes, Florida House]. “I believe I drove under the influence of alcohol.  I know that I had endangered the lives of other drivers and pedestrians [yes, tell it like it is] and had risked damaging property.  I intend to tell my legal counsel to bug off [yes, be courageous], and rather instruct him to look for ways to improve my behavior with the local municipality.  I look forward to publicly sharing the entire story, as it develops wasting no time [yes, act like a legislator]. Until then, I humbly ask for everyone’s forgiveness, [yes, the least]. I know that I have disappointed my constituents for my actions, and I look forward to communicating with my constituents immediately [yes, remember the times tables] on this matter.”

Do not the constituents hate it when Florida House hypocrisy and times tables get between them?  Rep. Eagle will not want to lose and he thinks he understands why.  Eventually, though, Rep. Eagle will lose and not understand why.

Epilogue:  Hire the worst legislative aide possible in the written world of excuses.  He might hit the jackpot on the times tables.

Exceptional expose. Hitting hard on the ideas of the Liberal Left (Labour) on the British side of the pond. ThursdayMan

See this link for article:  http://defendthemodernworld.wordpress.com/2014/04/22/we-must-stop-the-british-obama-now/ 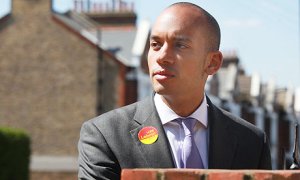 There is a widely shared belief in the drinking rooms of Westminster Village that a certain Chuka Umunna MP (Streatham, labour) is headed for the top of British politics.

The child of a Nigerian father and Irish mother, Umunna, 35, is already considered the country’s leading ‘black’ politician and has created around himself an aura of excitement that will be all too familiar to our friends across the pond.

Umunna is so often described as the ‘British Obama’ that the lazy racism of the term is overlooked and only the positive insinuations allowed to burn through.

And I suppose Umunna is the British Obama, at least in the sense that he is ‘black’, young and – most importantly of all- a potentially devastating weapon for the Left.

To understand why he holds such value, it is necessary to look deeper into the Liberal mindset, past the velvet-curtain of virtue and…

ThursdayMan by James Pat Guerréro is licensed under a Creative Commons Attribution-NonCommercial-NoDerivatives 4.0 International License.
Based on a work at https://jamespatrick1.wordpress.com/.
Permissions beyond the scope of this license may be available at http://thursdayman.com/.
ThursdayMan | el hombre del jueves
Create a free website or blog at WordPress.com.
%d bloggers like this: